Why Messengers Are Winning Over Social Media?

Messaging apps and social media platforms have been in an instant fight during the last couple of years. The fact is, it’s getting more challenging for social media to compete and this is not just a statement; The Statistics Portal claims that the number of active messaging app users exceed the number of social media users. Moreover, this is a continuous rising phenomenon for both people and businesses.

Ever wondered why is this happening? Well, let’s explore several favorable features messengers have as well as the reasons behind this abrupt shift of people from public to private networks.

Messaging security, as well as end-to-end encrypted communication, is one of the most important factors people are looking for while choosing a messenger for their daily uses. A great example of a private and hacker-protected messenger is Zangi Messenger. Unlike other messengers, this messaging app is decentralized and doesn’t keep any of users’ data on any servers.

This means that only you possess your messaging history. 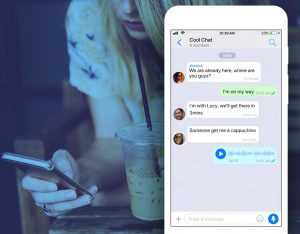 In the era of advanced technologies, simplicity is power. Social media for business networks contain too many overwhelming features and buttons, too irrelevant content and dizzy experience. In contrast, messengers are more straightforward to use – file sharing, call forwarding, voice and video calling, making affordable international calls are super easy to organize!

Since messengers are not as overloaded as social media, they operate faster even in problematic conditions, such as poor internet connection or crowded Wi-Fi. At the same time messaging apps consume low data and care about your wallet. After all, who wants to pay unjustified bills for reaching out friends and family? No one!

The information flow of social media is vertiginous. To control this, social media platforms use various algorithms filtering the content. Meanwhile, messengers do not have the same strategy. More specifically, they make the followers more qualified by reaching them one-by-one and generating better results. No algorithms, just pure reach!

It is undoubtedly true that messengers take communication to the next level taking over both social media giants and calling or emails. Marketing and IT godfathers argue that messaging apps will become a major tool for marketing campaigns in 2018. Taking into consideration this, Facebook offered the Facebook Messenger, bought WhatsApp, and now they have 2.6 billion users combined.

So, let’s take a breath and stay up to date with those changes happening almost every day.

The Most Safe and Secure Messaging App - Zangi